Mother and Daughter Give Birth within Days of Each Other

April 7, 2022 – Twice the joy at Rambam Health Care Campus: A Haifa resident gave birth to a son and then became a grandmother when her daughter gave birth to a baby girl one week later.

Patricia Rachel Ben Dahan, 43, a resident of Haifa, visited the Obstetrics & Gynecology Division at Rambam twice in recent days – once to give birth to her sixth child and a second time to attend the birth of her first granddaughter, who was born on the day of her uncle’s brit.
“We made Aliya from Argentina ten years ago with two children,” says the new mother and happy grandmother. “Since then, I have given birth to four children at Rambam – the last one a few weeks ago,” explains Patricia.
It was only natural that Jennifer Goldfarb (22), Patricia’s daughter, would also come to Rambam to give birth to her first daughter. “We knew Jennifer was expecting to give birth any day,” she shares, adding, “We were amused by the idea that we might give birth at the same time.”
Exactly one week after Patricia gave birth, it was Jennifer’s turn. At the end of hours of labor, Patricia’s first granddaughter was born on the morning of the eighth day. “I was worried all night,” Patricia recalls. "I wanted to be near my daughter at Rambam. It was Jennifer’s first time giving birth and our first granddaughter, and I'm at home with a newborn baby boy. The brit was scheduled for 2:30 pm, and that morning, Jennifer's husband announced that the birth was starting. I left the baby with my husband and went to be with her. I was privileged to be at the birth for two hours and then returned home to get organized for the ceremony.”
“I was hoping my mother would come,” explains Jennifer. “She gave me strength. I needed her by my side, and as soon as she arrived, I started smiling. The birth was just amazing, the staff was supportive and gave me confidence. Mom already knows everyone here,” she says with a laugh.
And what is it like to raise the two babies together? “Exciting, strange, happy – everything together,” they reveal. In addition to being pregnant and giving birth at the same time, they also live next to each other and work together in a bridal salon. “When the children get older, we will explain the complex situation to them. In the meantime, I think about how I will babysit my granddaughter together with my son,” says Patricia. “At Rambam, they are already asking if I’ll be coming back to give birth again and if my daughter will be joining me.” 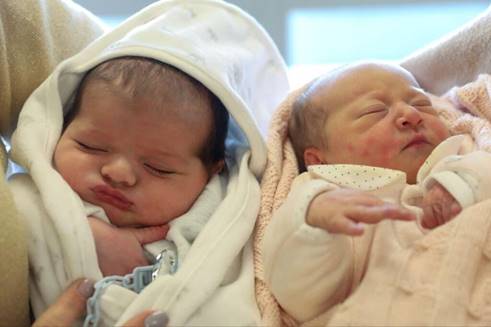