December 6, 2021 – The Department of Social Work at Rambam Health Care Campus, in collaboration with the Institutional Committee for the Prevention of Violence against Women, launched a campaign to increase awareness of the wave of violence against women.

Rambam Health Care Campus recently marked the 2021 International Day for the Elimination of Violence Against Women with a powerful campaign organized by the Department of Social Work, in cooperation with the Institutional Committee for the Prevention of Violence Against Women. A variety of activities were held throughout the hospital and online, with the aim of ending the wave of violence directed at women in Israel – a rising phenomenon in Israeli society.
Ministry of Health data indicates that in 2020, over 4,600 women aged 19 and over were identified as victims of violence by Israeli hospitals and community health facilities. As of October 31, 2021, about 115 women who were victims of physical violence arrived at Rambam’s Green‑Wagner Department of Emergency Medicine for treatment. This reflects a 136% increase over 2020, and unfortunately, the number is expected to be even higher by year’s end.

The events surrounding the International Day for Elimination of Violence Against Women began with a fascinating lecture at Rambam by Nir Elimelech, brother of the late Anat Elimelech, a model and actress murdered by her husband. Nir spoke movingly about his sister and the problem of violence against women, and provided the audience with warning signs of couples in a violent relationship.
Stalls were set up to sell pastries and Hanukkah doughnuts donated by the "Shemo" and "Agami" bakeries, with all proceeds going towards shelters for battered women, as they do every year. Informational materials were distributed with instructions regarding how to identify and locate women who are victims of violence. The most moving element of the event was a silent display consisting of a pile of red shoes, dedicated to the memory of women murdered in 2021.
Sagit Zeevi, Director of the Department of Social Work at Rambam, explained that there is growing awareness among women and in society that economic control, as well as verbal and emotional violence, are all abusive and harmful. Recent data published by the Ministry of Social Affairs and Social Security indicate that there has been a marked increase in reports of domestic violence and calls to the emergency hot line over the past year, more than half of which involved violence against women in domestic relationships. These developments may, in part, be the result of greater public awareness of the issue.
Zeevi stated, “The task of social workers at the medical center is to continue to make information accessible and increase awareness among the medical teams. The greater the awareness, the more it would be possible to locate and provide tailored care to the victims. It is important to understand that our encounters with victims of domestic violence can be critical and may save lives.”
​
In the photos: Different activities held at Rambam to mark International Day for the Elimination of Violence Against Women and show solidarity with the victims.
Photography courtesy of the Rambam Health Care Campus Spokesperson’s Office. 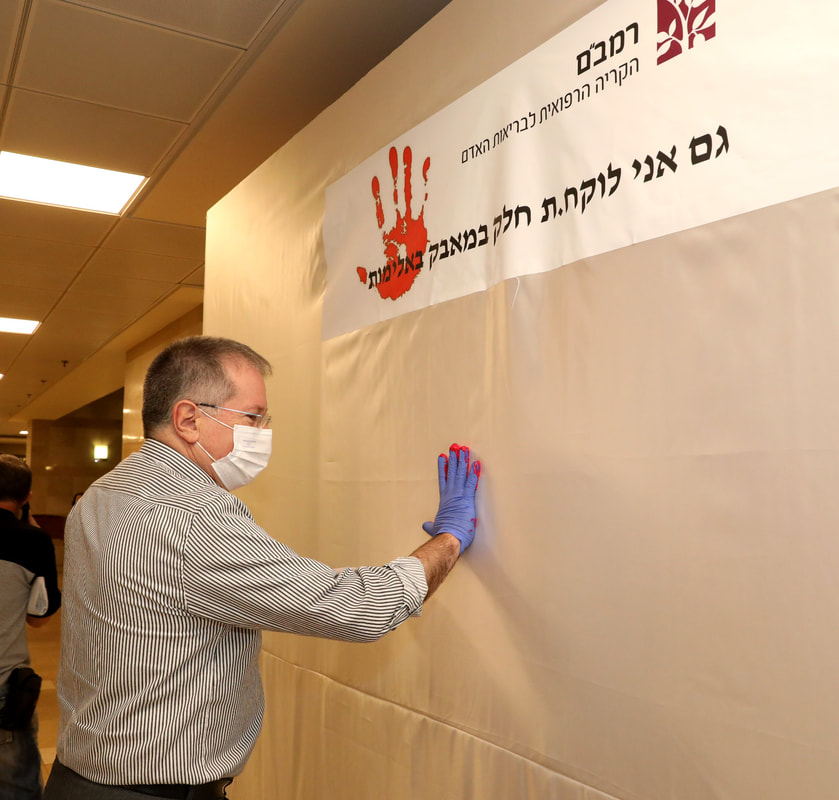