Hundreds of swimmers from Israel and abroad participated in the annual swim to raise funds for research at Rambam Health Care Campus of sudden cardiac death in children and young adults.
24 May 2019 – For the fourth year in a row, “Swim From the Heart - Cape Carmel”, an international non-competitive swimming event, took place on Haifa’s beaches. The swim is a joint initiative between Rambam, the Municipality of Haifa, Shvoong and others, and is dedicated to raising awareness of and mobilizing funding for groundbreaking research for predicting and preventing sudden cardiac death in children and young adults. As in previous years, more than 400 professional and amateur swimmers participated in various heats.
The first swim organized by these three groups was launched in 2016 and the main attraction was Guy Cohen, who lost his daughter Neta almost 20 years ago. On her first day in first grade, Neta collapsed without warning and died of cardiac arrest. Cohen closed a circle when he participated in the first Swim From the Heart and set a record – the first Israeli ever to swim for 24 hours straight in open water for more than 70 kilometers, all with the goal of raising awareness for sudden death in children.
On Friday, Rambam Director Dr. Michael Halberthal launched the swim with outgoing Director Professor Rafi Beyar. Dr. Halberthal, who worked previously as a pediatric intensive care physician and established and managed the hospital’s Pediatric Cardiac Critical Care Unit, said that the many years he spent caring for children in intensive care had contributed to his understanding of raising public awareness in the prevention of sudden cardiac death. Dr. Halberthal and Professor Beyar accompanied the swimmers in a boat and tracked their progress along the longest course of 4.5 km. One of the long-term participants was Dr. Arthur Kerner, Director of Rambam’s Interventional Cardiology Unit. Dr. Levy Gerzberg, one of the founders of the Israeli high-tech industry, also participated in the swim.
Heart diseases, including sudden cardiac death, is still the number one cause of death in the United States and in the Western world in general. When it comes to cardiac disorders with an undiagnosed genetic background, both younger and older patients receive no warning signs before the fatal moment, making prevention more difficult. Rambam, as stated, has set a goal to investigate and treat the phenomenon, and during the Swim From the Heart, an information booth was set up on the beach by Dr. Miri Blich of the Department of Cardiology, which is leading the way towards increased awareness of genetic testing to prevent cardiac arrest in children and adolescents.
In the photos:
Dr. Michael Halberthal and Professor Beyar accompany the swim.
Dr. Halberthal and Professor Beyar start one of the heats.
Dr. Arthur Kerner finishes swimming with Dr. Levy Gerzberg, one of the fathers of Israeli high-tech.
Photography: Pioter Fliter 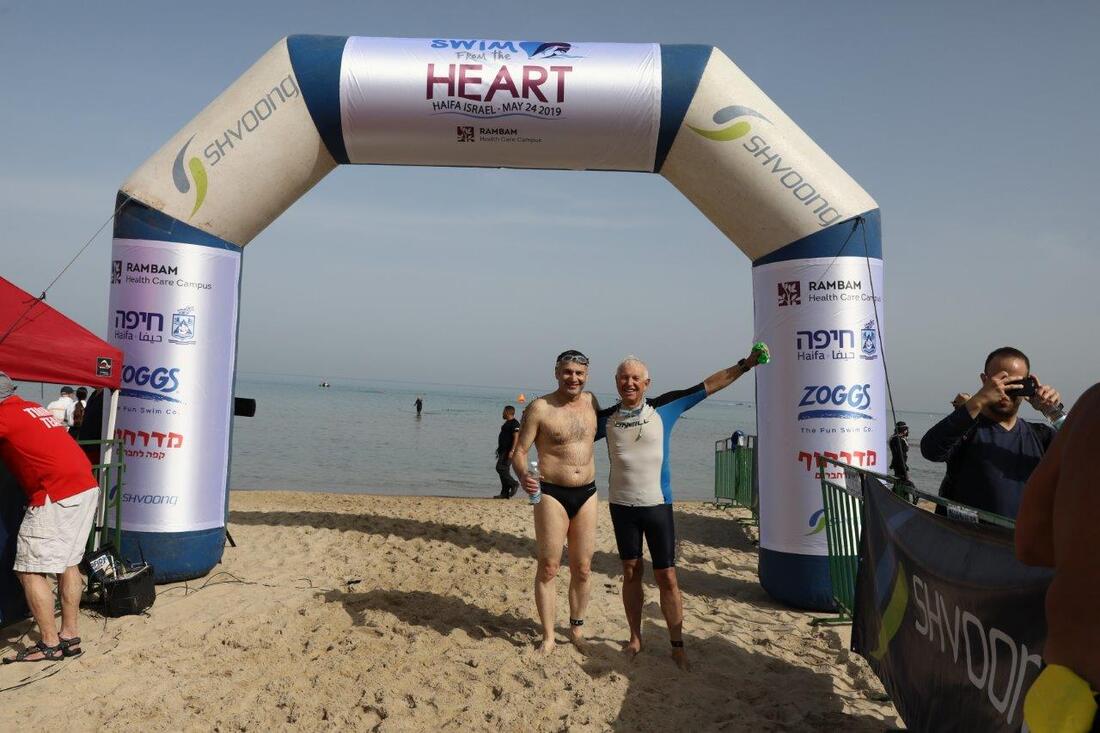