March 18, 2021 – In a rare surgical procedure, doctors at Rambam Health Care Campus performed hip replacement surgery using a customized implant. After years of suffering and several repeat surgeries to treat the problem, Naomi McLeod has renewed hope for quality of life.
Hip replacement surgery in the modern era is a common intervention. But for 69-year-old Naomi McCloud, from a suburb north of Haifa, the procedure became all too familiar, as she underwent this surgery three different times. Naomi has suffered from hip problems since she was a child. As time passed, her hip became increasingly stiff and she suffered from severe joint pain. Naomi lacked sufficient bone in her hip joint, a problem that was exacerbated by repeated hip replacement surgeries. Several years ago, Naomi underwent an additional surgery from which she never fully recovered, and which did little to alleviate the intense pain in her hip.
Last year, Naomi consulted Dr. Nabil Ghrayeb, Deputy Director of the Orthopedic Surgery Section at Rambam Health Care Campus, regarding her condition. Dr. Ghrayeb ordered a series of comprehensive tests to gain a better understanding of Naomi’s condition. The tests indicated a weakening of her hip implant as well as a lack of sufficient bone to accommodate a standard hip replacement. Naomi’s condition prompted Dr. Ghrayeb and his team to think "outside the box" to formulate a personalized solution for Naomi’s rare condition.
Naomi was evaluated with a CT scan and detailed three-dimensional imaging studies. The studies were then sent to a German company specializing in personalized hip implants, which could be tailored in accordance with the amount of bone remaining in the patient’s hip joint. The customized hip prosthesis recently arrived in Israel with detailed instructions for its implantation.
The surgery, which lasted several hours, involved a large surgical team led by Dr. Daniel Levin, Head of Rambam's Hip Surgery Service and an expert in hip replacement surgery, as well as Dr. Ghrayeb. The tailor-made prosthesis was successfully implanted in Naomi's hip. Within less than 24 hours following surgery, Naomi was able to walk around the department with the assistance of a walker, placing full weight on both of her legs.
Dr. Ghrayeb stated, "We are very pleased with the results of the surgery and with the stability of the hip implant. The connection to the bone also looks strong. This is a complicated surgery and very few patients are able to place their full weight on their legs within the first 24 hours.” He added, “This is the first surgery of its kind at Rambam. The solution was personalized for this patient’s unique requirements. This approach has great promise for a quicker recovery, more precise results, and in most cases, a much better outcome for the patient.”
In the photo: The hip replacement operation performed at Rambam.
In the photo: Naomi McCloud and Dr. Ghrayeb, following surgery.
Photography courtesy or Rambam Health Care Campus.
​ 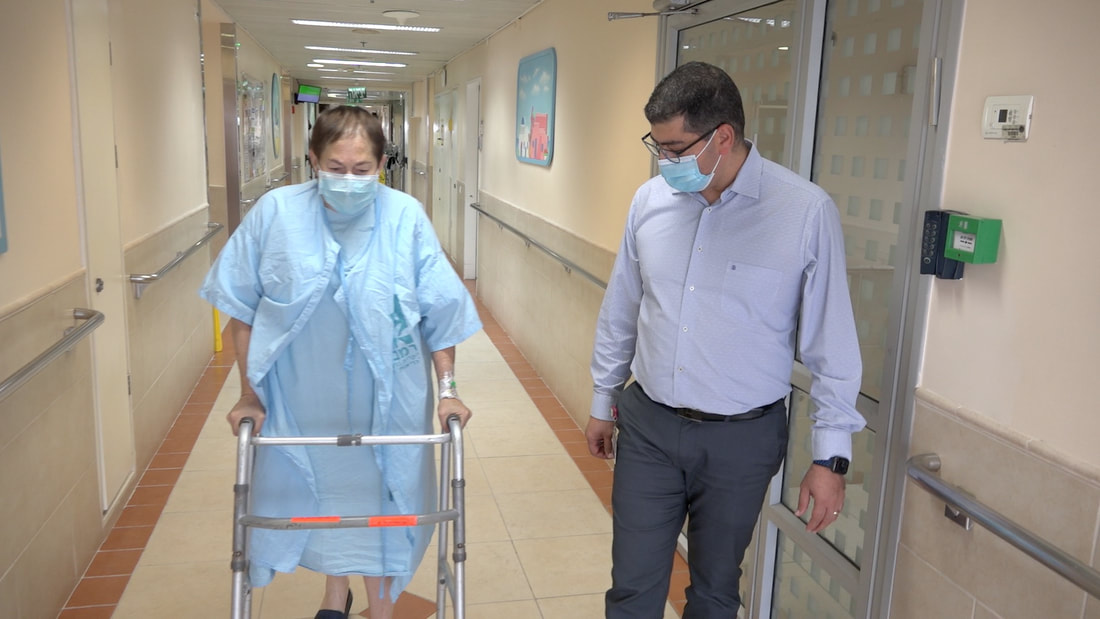