Stanford Medicine and Israel's Rambam Health Care Campus (Rambam) have just concluded the first joint Symposium on Planning for the Next Generation, laying the groundwork for possible collaboration and strategic cooperation on issues relating to the future of medicine.

The concept for the Symposium and mutual areas of collaboration was birthed via discussions between Professor Lloyd Minor, the Dean of Medicine at Stanford, and Professor Rafi Beyar, Director of Rambam, less than a year ago. “At that time, we observed that both institutions are very similar in their visions of advanced medicine, applied research for the benefit of patients, technology and innovation for humanity,” said Beyar.

Professor Karl Skorecki, Director of Medical and Research Development at Rambam, and Professor Eben Rosenthal, Medical Director of Stanford Cancer Center, developed and coor­dinated the symposium and related meetings. Topics explored during the two-day symposium related to data health science and digital health, technological innovations in health care management, and programs that promote innovation which, remarkably, bear the same name in both institutions—"SPARK."  The SPARK programs at both Stanford and Rambam seek to transform biomedical research discoveries into innovative new treatments for patients.

“During the conference we discussed precise, personalized health care and the issue of health in Israel, including the complexities and challenges posed by the diverse local population and Israel's relationships with its neighbors,” added Professor Beyar.

The huge budgetary gaps between the two institutions were presented—Rambam, a 1,000-bed hospital with 130,000 emergency room visits annually has a budget of four hundred million dollars a year, as compared with Stanford, a 600-bed hospital averaging 60,000 emergency room visits annually, with a budget of seven billion dollars a year. “Despite the enormous gap, Israel ranks much higher than the US in many measures of the quality of medicine,” according to Professor Beyar.

Speakers from both institutions discussed the challenges in maintaining equitable health care, closing gaps, and coping with future health needs, as well as the heavy burdens confronted by both health care systems.

One of the symposium highlights was the discussion of areas of prospective cooperation between Stanford Medicine and Rambam, including medical innovation, clinical research, exploiting the technological advances afforded by "big data," and cutting-edge drug development.

The 12-person Rambam delegation to the symposium included leading physician-scientists and researchers. In addition to the Rambam team, Professor Khitam Muhsen, an epidemi­ologist from Tel Aviv University who began her career as a pediatric nurse in Rambam, and Professor Ezzeldin Abuelaish, a gynecologist from Gaza, currently living in Canada, also participated in the Symposium. Professor Abuelaish, who lost his daughters in the 2014 Gaza conflict, sought to promote the advancement of women, in their memory.

The symposium concluded with an extraordinary lecture by Professor Richard Horton, Editor of the prestigious medical journal, The Lancet. The Lancet published an issue devoted to health care in Israel last year. Professor Horton spoke of the aspiration to globalize health and medicine throughout the world. He referenced a sensational recent discovery that points to Mount Carmel in Haifa as the source of modern civilization. There, a human bone between 175,000 to 200,000 years old was discovered—50,000 years older than any other human fossil found in the region. Noting the proximity of Mount Carmel to Rambam, Professor Horton highlighted the symbolism of Rambam as a place that unceasingly strives to make the world a better place for all of humanity. 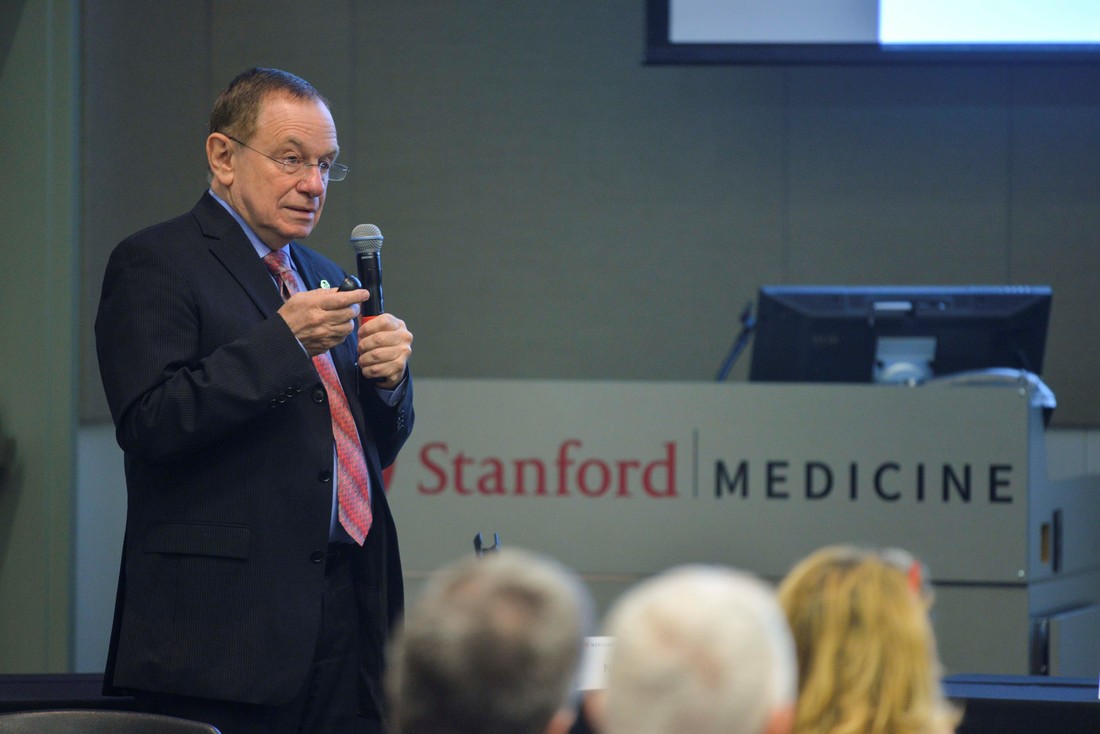