November 26, 2020 – For years, neonatologists worldwide have debated the most effective method of treating the respiratory issues that afflict premature infants. New groundbreaking Israeli research may significantly change the way these problems are addressed.
Premature babies, often referred to as “preemies,” are often born with underdeveloped lungs; hence, the reason for their most commonly experienced problem – breathing difficulties. Preemies may need mechanical ventilation to help them breathe, and neonatologists have long been divided regarding the preferred means of non-invasive ventilation for their extremely small and fragile patients. The controversy involves two different types of tubing inserted into a preemie’s nose to assist with breathing. The most widely used approach involves short, thick, rigid tubing while a newer approach uses long, thin, flexible tubing. Both of these non-invasive approaches must be distinguished from invasive ventilation, which involves the insertion of a tube into the infant’s trachea.
In an effort to resolve this issue, an important collaborative clinical research trial was established, led by Dr. Ori Hochwald, Deputy Director of Rambam’s Neonatal Intensive Care Unit (NICU) and Professor Amir Kugelman, Director of the hospital’s Department of Neonatology, with Professor Eric Riskin, Director of the NICU at the Bnei Zion Medical Center in Haifa. They recently published the results of the trail in the prestigious medical journal, JAMA Pediatrics. The study showed that using smaller and thinner tubes was as effective as the more traditional (stiff tubes) approach, but resulted in significantly fewer facial injuries to the particularly delicate skin of preemies. This news couldn’t have come at a better time, since Tuesday, November 24, marked Israel’s observation of Preemie Day, established to increase awareness of the breathing and health issues experienced by premature babies.
“The prevailing view among doctors is that the use of thick, stiff tubes allows for the transfer of respiratory pressure and more effective breathing support for premature infants, compared to the use of thin tubes,” explains Dr. Hochwald, who headed the study. “This conclusion was the result of prior tests of the two methodologies on different models. However, no one has ever looked into the issue on actual patients! In some cases, premature babies experience significant injury to their noses as a result of the more aggressive methodology that relies on stiffer, wider tubes. These facial injuries sometimes take a significant time to heal, but since the goal was to avoid invasive ventilation that involved even greater risks, such injuries were, in some cases, were still considered a better option."
The collaborative study surveyed 166 premature babies requiring non-invasive respiration. The babies were randomly divided into two groups. Each group received non-invasive respiratory treatment using either a thick, or a thin, flexible breathing tube, with the purpose of examining whether invasive ventilation could be avoided for at least 72 hours, in order to declare the non-invasive treatment successful and effective.
Dr. Hochwald explained, "This type of research is referred to as ‘noninferiority’ research. The intention was not to prove that one approach was superior to the other, but to show that the less aggressive approach was as effective as the prevailing method.”
"Our study proved, for the first time, that using thin, flexible tubing is just as effective as the more widely used approach involving short, thick tubing," says Dr. Hochwald. "It sounds like a minor thing, but for the medical staff, babies and families, the results of our study support a significant change, and an improvement in the care of premature babies. Using thin, flexible tubes is less invasive, causes less facial injury, but is just as effective as the more commonly used approach. Since we are talking about a treatment that many premature babies will require at some point or another, this is an important step for everyone."
Read more about the study here.
In the photo: Dr. Hochwald in Rambam's Neonatal ICU.
In the photo: Using the thin tubes during non-invasive respiratory treatment.
Photography: Rambam Health Care Campus 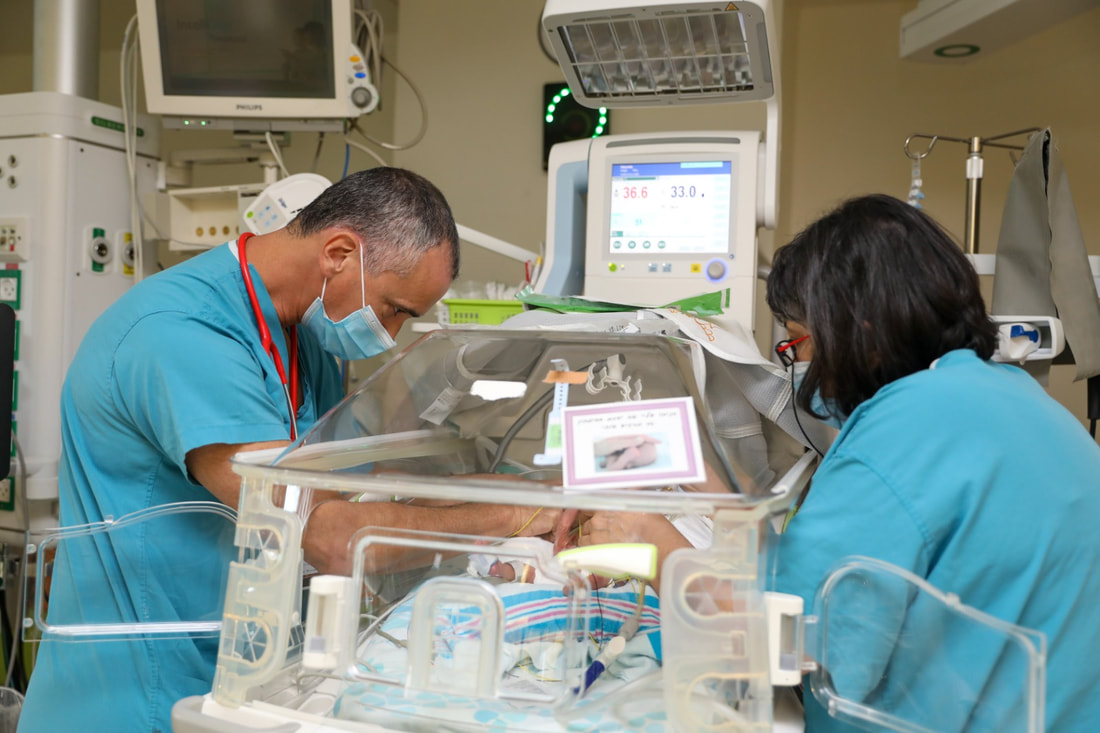