​October 11, 2021 – Bar, Chen, and Alvin met as leukemia patients in the Pediatric Oncology Department at Rambam Health Care Campus. A decade later, after all three had recovered, they met on an Israeli naval base where all three happened to be posted. They recently shared their story with Israeli news website ynet.
​
When he was just four-and-a-half years old, Corporal Alvin Haimov (21), from Karmiel, was diagnosed with leukemia and treated at Rambam for approximately two-and-a-half years. He remembers sitting in his grandfather's house, and being unable to stand up. Following extensive testing, his family received the bitter news. “Suddenly, you need to absorb the fact that yesterday you were in kindergarten, and now you are going to live in the hospital,” said Alvin. He recalls that during the course of his treatment at Rambam, soldiers from the nearby naval base frequently visited Rambam to volunteer with the pediatric patients. Alvin remembers thinking that someday, he too, would serve in the Navy.
In the eighth grade, Alvin took the first steps towards achieving his goal – he joined the Acre Marine Officers Training Academy. He completed his last two years of high school there and graduated as a certified machine mechanic. He then successfully completed a course at a naval training base, and was assigned to a different naval base in Haifa as an infrastructure machinist. Several months ago, Alvin began an officers' training course. Now he is in charge of course participants at the naval training base. Alvin states, “It wasn’t always clear that I’d walk on my own two legs, talk, and function. Most people take these things for granted, but once you have been through a severe illness, you can't do that.” 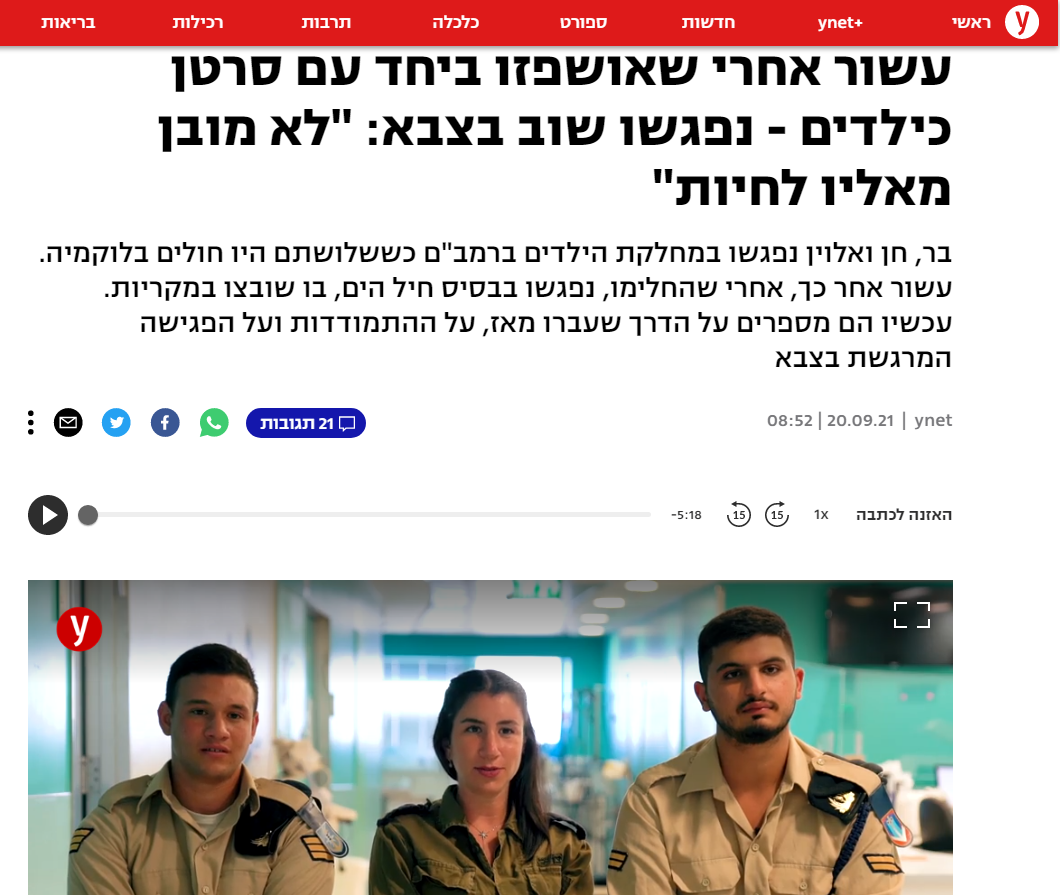 Corporal Bar Hazzan, age 20, lives in Acre and Kiryat Motzkin. He was diagnosed with leukemia at the age of three and was treated at Rambam for almost a year. “When I understood that I was sick, I was really afraid. I was a little boy and I didn't understand what was going on,” said Bar. He recalled that at Rambam, great efforts were made to maintain a normal routine for the children. “Several children were place in the same class and they let us play on computers. You grow accustomed to this life. You and your friends are all undergoing the same types of treatments,” he recalls.
When he celebrated his Bar-mitzvah, Bar decided to donate the gifts he received to the department where he had been hospitalized as a little boy. In addition, he began to regularly visit the hospitalized children in order to give them additional encouragement and support.
Bar's father served in the Navy and Bar wanted to serve in the same unit as his father. During the course of his military training, Bar met Chen Eliyahu, who had been hospitalized with him at Rambam when they were both young children. Eventually, Bar was posted to the base where Chen was serving, and today he works in combat support on one of the naval bases.
Chen Eliyahu, (23), from Kfar Yona, was diagnosed when she was six years old. “When you understand that you are sick, the door of childhood slams in your face. The only thing you care about is winning the battle against this disease. Your life is turned upside down,” explains Chen.
Chen was drafted into the army in December 2016 as a bureau clerk in the office of the commander of the Navy. After completing an officers’ course, she was assigned to work in human resources for an elite combat unit. She subsequently served as a screening officer at the naval installation at Tel Hashomer. In this role, she appointed Bar Hazan to his current position, after the two met by chance at the screening base.
Chen notes, “The children who are sick together are not just friends – they become your family. They know what you are going through.” So, when Chen ran into both of her childhood Rambam friends—Bar and Alvin—at the naval base, her emotions were intense. “My heart was so full at that moment! This was an insane scenario of life coming full circle for me. The three of us were in uniform, representing our country, many years after we had all been seriously ill. It was incredibly moving!”
A few months ago, Chen completed her military service, and now works for the organization Fighting Together, which organizes soldier visits to hospitalized children. Like Alvin, Chen fondly remembers the visitors she received when she was a small child – hospitalized at Rambam and fighting for her life. She is now giving back to an organization that gave so much to her when she was ill.
Australian Friends of Rambam Health Crae Campus