Rambam Nurses and Doctors Save Infant via Rarely Performed Surgery ​

​Against All Odds: Rambam Health Care Campus has already performed several complex and challenging surgeries, but an operation performed last week was exceptionally unusual and saved this newborn’s life.

In a rare and complex surgery, Rambam physicians removed a one-kilogram tumor from a premature baby weighing only two kilograms. While still in her mother’s womb, a massive tumor had grown on the infant’s tiny body. In a rare surgical procedure performed in only a
handful of cases worldwide, a multi-disciplinary team of more than 50 medical professionals removed the tumor—saving the life of the newborn.

The premature baby was born with a rare tumor known as a teratoma. The tumor grew within her body and was attached to her neck, head, and chest, and received blood from the principal artery that supplies blood to the brain. This type of teratoma, which develops in
the region of the head, occurs in only one in a million pregnancies and generally leads to the death of the fetus or immediately following birth.
​
During the course of the pregnancy, the doctors were well aware of this tumor, which was half the size of the fetus. Despite the apparent danger to the fetus, the parents were determined to continue the pregnancy and to give birth to their daughter. Rambam
undertook extensive measures to prepare for both the challenging delivery and the subsequent surgery, in order to maximise the chances of survival for the baby girl.
The first phase involved delivery by caesarean section. Since the tumor was blocking the infant’s airway, after removing her mother's womb, the surgeons left the umbilical cord, maintaining the connection to her mother's vascular system. With the aid of an endoscopic
camera, the physicians then placed a breathing tube in the newborn's air passages to allow her to breathe. The two-hour surgery involved a large multi-disciplinary staff that had to be prepared for any eventuality. The infant was then transferred to the Neonatal Intensive Care
Unit for care and continuous supervision.
Once the baby's condition had stabilized a few days later, the physicians undertook the next phase—closure of the blood vessels nourishing the giant tumor. The surgery was performed with the aid of a catheter of the main artery leading to the infant's brain, after which the
doctors verified that the blood supply to her brain had not been endangered.
Immediately afterwards, the physicians began the third and most complicated surgery:
excising the tumor from the infant. For more than four hours, Rambam surgeons performed an extraordinarily delicate, complicated, and dangerous operation. Step-by- step they separated the tumor from the baby girl’s skull, jaw, neck, chest well, blood vessels and air
passages, focused with utmost care on protecting her vital organs and limbs. Some fifty physicians, nurses, and other staff members of Rambam participated in all three phases of these complicated procedures and surgeries, including specialists in head and neck surgery,

neonatology, anesthesiology, plastic surgery, gynecology and obstetrics, brain catheterization, neurosurgery, pediatric surgery, and pediatric pulmonology—to name a few.
At the conclusion of the successful surgery, the baby was transferred for continuing treatment to the Department of Neonatology and Neonatal Intensive Care in the Ruth Rappaport Children's Hospital at Rambam. According to Rambam physicians, “it was a mission that initially appeared to be impossible. After three difficult surgeries, and barely two weeks old now, the infant is recovering well. She is alert and functioning, to the great joy of her parents and the large staff responsible for her care.” 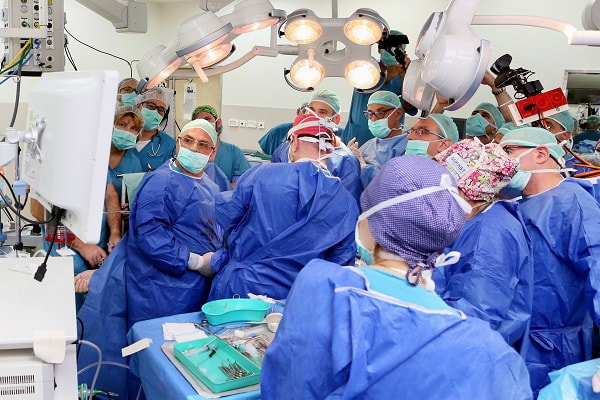 Pictured: The medical team at Rambam Health Care Campus during one of the procedures
performed on the newborn.
Photo Credit: Pioter Fliter
Australian Friends of Rambam Health Crae Campus