From the day she was born, the staff at Ruth Rappaport Children’s Hospital has accompanied little Shiri Eshet, due to the rare illness from which she suffers. Shiri recently celebrated her second birthday together with her parents and her extended family from the hospital.
For Shiri Eshet from Kibbutz Yagur, Ruth Rappaport Children’s Hospital feels like home. Since she was only a few days old, Shiri has been in and out of the hospital because of a rare congenital illness that affects her bowels.
The disease, called chronic intestinal pseudo-obstruction (CIPO), affects one in one hundred thousand newborns, with a few dozen affected children living in Israel. Shiri’s case is considered to be severe and she requires intravenous nutrition in order to survive. At her young age, due to the complications of the disease, she has undergone surgery nine times.
During her long stay in the hospital, Rambam Health Care Campus turned into a second home for the toddler and her family, with the Meri & Sol J. Barer Pediatrics B Department staff becoming like an extended family for them. Recently, this special relationship was displayed when Shiri celebrated her second birthday with department staff and volunteers. Sounds of singing and clapping could be heard coming from Shiri’s room, and the space was filled with gifts, balloons, and other decorations.
Shiri's parents, Liat and Matan, shared that in order to maintain her health, Shiri requires constant, around-the-clock care and a lot of hospitalization. "Rambam's amazing team is connected to us and we are connected to them," says Liat. “We see them more than we see members of our family. They support us and are there for us during both bad and good times. We hope that a solution will be found someday, and until then, we are trying to give Shiri as normal a life as possible. The birthday celebration was an exciting and joyous occasion. It was great fun to celebrate with the amazing team and our large, extended family."
For the department’s nursing staff , this is the most natural act in the world. "This is the second year that we are celebrating with our Shiri," explains Anna Levinson, the department’s head nurse in the department. "She is like a daughter to all of us. When someone is with you for so long, they really capture your heart," adds Meirav Gabay, another nurse in the department.
Professor Ron Shaoul, Director of the Pediatric Gastroenterology Unit at Ruth Rappaport Children’s Hospital, who treats Shiri explains, "This is a rare disease, a certain type of gastrointestinal disorder. Each year, five or six babies are born with CIPO, and in total, there are several dozen children like this in Israel. It is a congenital disease with varying degrees of severity, and the great majority of these cases involve children who are dependent on parenteral nutrition. Our hope and efforts are focused on trying to wean them off of the intravenous nutrition and onto oral nutrition as much as possible. For Shiri’s birthday, we wish her happiness!"
In the photos: Shiri celebrates her second birthday at Rambam.
Photography: Courtesy of the family. 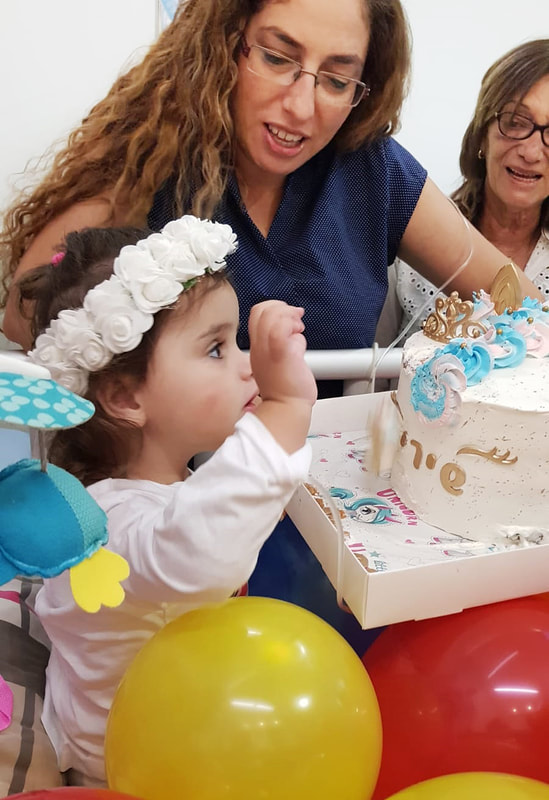