Rambam has inaugurated a service to treat serious digestive problems using transplantation of feces. The final product does not resemble the source – it comes in small capsules filled with white powder, and it's clean, safe, and effective.
Clostridium Difficile is a rather cruel bacterium that causes extensive diarrhea and negatively impacts quality of life. In elderly people or individuals suffering from other diseases, clostridium can also be life-threatening.
The medical community has been studying this disease for decades, discovering that the more it is treated with antibiotics, the more resistant the bacteria becomes, resulting in recurrence of the infection. In recent years, it became clear that the best way to deal with this bacteria was to ensure that the digestive system has a balance of both good bacteria and microbial bacteria. When this balance occurs, bacteria like the clostridium cause less damage.
One of the methods used to restore balance in the digestive system—which has been used in leading medical centers around the world—is microbial transplantation, in other words, the transfer of good bacteria from a healthy person. Studies have shown that this treatment has a 90% success rate, which is much higher than the success rate for the far more aggressive antibiotic treatment.
The microbiome, or “good” bacteria, is produced from the excrement of healthy people who actually donate their own microbiome to treat patients. This treatment is approved by the Ministry of Health. One method for consuming this healthy product is by swallowing it in capsule form.
At Rambam, the capsules are made from the feces of a healthy person whose medical history has been carefully screened. The raw product is processed and cleaned, and turned into innocent-looking white capsules not at all resembling the original raw material. Each capsule contains millions of good bacteria aimed at restoring balance to the patients’ diseased digestive systems.
Recently, an 85-year-old woman was hospitalized at Rambam suffering from her third recurrent infection, following failed antibiotic treatment. The patient ingested the “good bacteria” capsules produced at Rambam and was released several days later, feeling well, no longer suffering from diarrhea, and without experiencing any side effects. "We are beginning a new era at Rambam in dealing with resistant bacteria," says Dr. Milena Pitashny, the researcher who heads the service, together with Dr. Haggai Bar-Yoseph of the Institute of Gastroenterology.
In the photos: Dr. Milena Pitshani and Dr. Haggai Bar-Yoseph, who are responsible for the service, with the capsules containing the powder for implantation.
Photo credit: Pioter Fliter 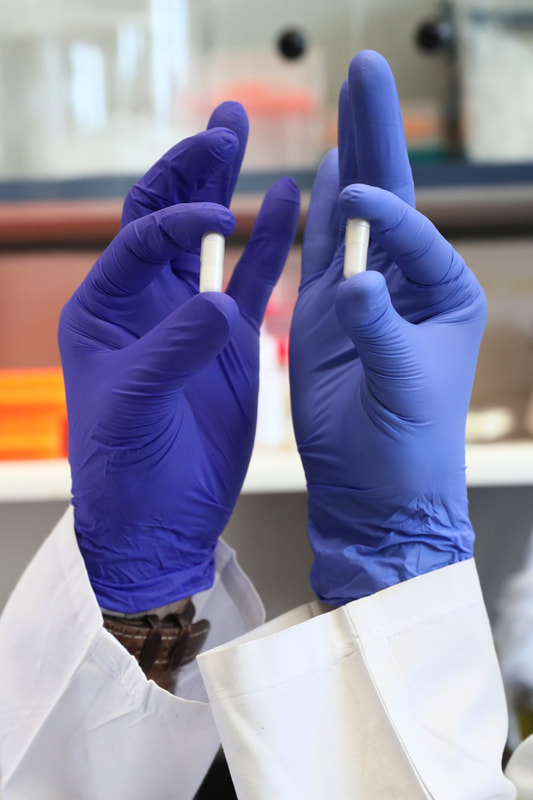