M., a prostate cancer patient, needed to undergo radiation treatment. However, as a carrier of a genetic mutation, this form of treatment could also endanger his health and cause intestinal tumors. A new methodology recently introduced at Rambam gives him and other patients hope.
Prostate cancer is the most common cancer in men, with more than 2,000 new patients diagnosed each year in Israel. Most of the diagnoses are in men over the age of 65, and the Ministry of Health recently reported a decrease in mortality from the disease, probably due to more efficient treatments and early detection.
The effective and currently accepted treatment for prostate cancer is radiation therapy. However, with all of its success, this treatment often involves side effects, including damage to the intestines, located near the prostate. A new medical product, recently introduced for use at Rambam Health Care Campus, can solve the problem and allow radiation therapy without fear of intestinal damage. Rambam patients are among the first in Israel to benefit from this innovative treatment.
The new methodology uses a bio-compatible gel that is injected into the body and dissolves after four to six months. The gel is injected between the prostate and the intestines, creating a layer of separation between the two organs, thereby reducing radiation exposure to the intestines. The methodology has been shown to reduce the side effects that may result from the radiation therapy to the prostate. The procedure, performed under sedation, is considered very safe and has good results in terms of its success.
"This is an innovative product approved by the FDA two years ago," explains Dr. Tomer Charas, Director of the Genitourinary Oncology Department in Rambam's Division of Oncology and the doctor who performs the innovative treatment. “The gel has been used to date in 25,000 cases worldwide, mainly in the United States, Canada, England, and Australia. There have been several papers and publications on this topic, with the leading work performed in the United States on 220 patients, comparing those who received the gel with those who did not. The most significant benefit that resulted from its use was the reduction of rectal radiation (the lowest part of the intestines), and there were fewer side effects related to both the intestines and the urinary tract. Following these results, we decided to adopt the treatment for our patients."
Since the radiation therapy team started using the new treatment, it has successfully treated about 20 patients. Rambam is the only hospital in Israel that routinely offers this gel treatment for prostate cancer patients receiving radiation treatment. According to Dr. Charas, the product is safe, easily inserted and absorbed, and helps reduce the radiation to organs around the prostate, thereby reducing the risk of side effects.
One of the first patients treated with the gel was M., 80, from Haifa, who was diagnosed with high-risk prostate cancer that required high doses of radiation therapy for the prostate and pelvic area. However, in M.’s case, the radiation therapy that would hopefully cure him of cancer, could potentially expose him to problems that would make his physical condition even worse. In addition to prostate cancer, M. carries a genetic mutation that exposes him to an increased risk of developing intestinal tumors, a condition known as Lynch syndrome, which causes 3% of all colorectal cancers. For patients with this syndrome, exposure to radiation significantly increases the likelihood of developing these tumors. For M., treatment with the bio-compatible gel was the perfect solution. Prior to radiation therapy, M. underwent successful injection of the gel and recently completed the round of radiation treatments. He is now being monitored by the radiation therapy team and waiting for the results of his treatment.
"The gel is designed for patients like M. and others who need intensive radiation therapy," concludes Dr. Charas. "The possibility of protecting the intestine with a safe, simple product that is absorbed into the body allows us to safely and effectively treat cases that have been borderline until now. There is hope for the sick, and that is what is important."

​In the photo: Dr. Charas while performing a bio-compatible gel treatment at Rambam.
Photography: Pioter Fliter 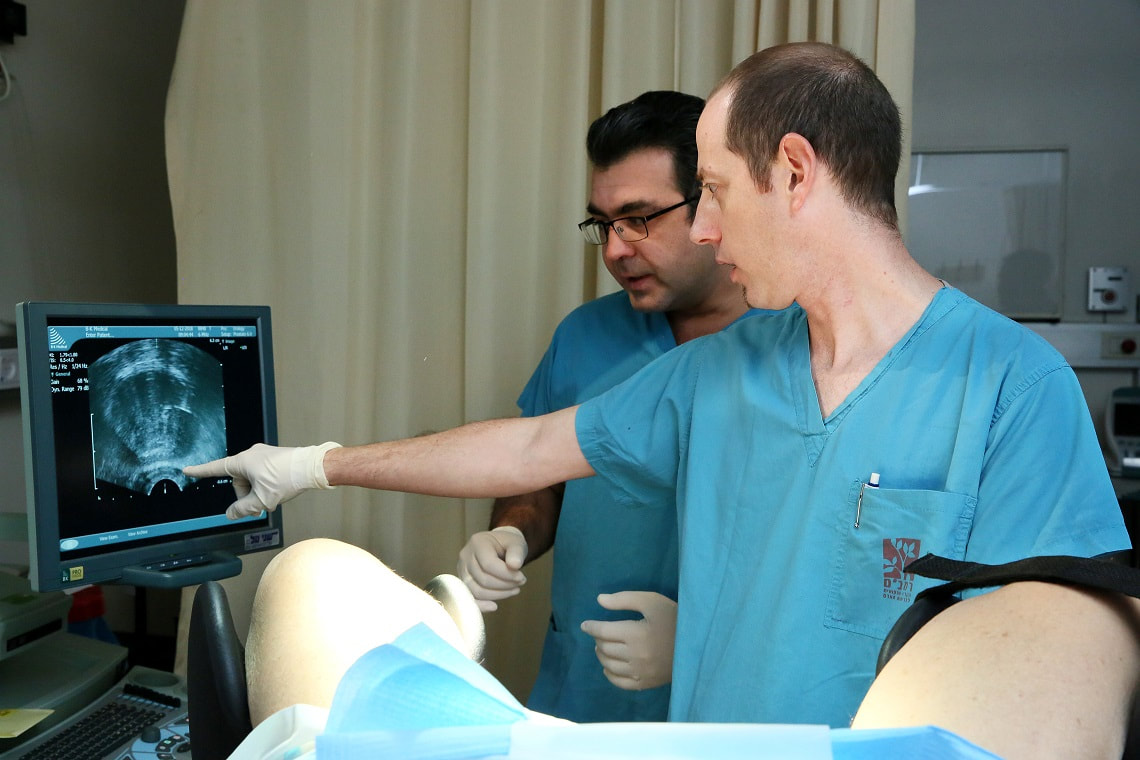