Israel and Hanan, a Jewish man and an Arab woman who each needed kidney transplants, had waited for years for surgery. With the help of a kidney donor chain that also brings together Jews and Arabs, compatible donors were found and their lives were saved.
September 22, 2019 – Relations between Arabs and Jews in Israel are often complex, but at Rambam Health Care Campus, these issues remain firmly outside the gates – even against the backdrop of the latest round of Israeli elections. Twenty-four hours before the polls opened, two Jewish men and two Arab women faced a dramatic moment – the results of a kidney donor chain that saved the lives of both Israel and Hanan.
Ido, from the religious Jewish community of Hoshaya, intended to altruistically donate a kidney to Israel, a man he didn’t know. Unfortunately, testing showed that he was not a match. Aida, from the Arab town of Shfaram, wanted to donate a kidney to her sister-in-law Hanan, but like Ido and Israel, the test results showed that Aida’s kidney was not suitable for Hanan. Doctors at Rambam proposed that the four participate in a kidney donor chain, which led to Aida donating her kidney to Israel, and Ido donating his kidney to Hanan.
Israel Belban (35), a resident of Kiryat Bialik, needed a kidney transplant due to a hereditary disease. Four years ago he began receiving dialysis, which completely changed his lifestyle. "I stopped working, and came to Rambam Hospital almost every day for four hours. At one point, I was hospitalized for six months. I was a transplant candidate on the waiting list for a donor.” One day, he received a call from the Matnat Chaim Association (an association responsible for facilitating hundreds of transplants in recent years), letting him know that a potential donor had been found. Belban’s hope was short-lived, however, because the donor—Ido—was not a match.
At the same time, and totally unaware of Israel’s situation, Hanan Amada—a Muslim woman from Shfaram—was also hospitalized at Rambam while waiting for a kidney donation. Aida Husari, her 52-year-old sister-in-law, said it was clear to her that she would save Hanan's life. "I was tested and told that the kidney was not suitable for Hanan. We were asked at the hospital if I would be willing to donate my kidney to someone else, and that maybe the other donor would be able to donate his kidney to my sister-in-law. I replied that if we can save two people's lives, I have no problem donating my kidney to him."
The transplantation took twelve hours and was performed by surgeon Dr. Ahmed Assalia and vascular surgeon Dr. Tony Karram. The donor chain was successful, and the donors and recipients were given the opportunity to meet one another. "I met Aida in the hospital, thanked her and brought her a gift and chocolates," Israel said excitedly. Aida added, "I am very happy that I saved the lives of two people. The racism of the politicians kills us, but we learned to live together, Arabs and Jews. Every Saturday we meet with our Jewish friends and we have no hatred for anyone – we grow up together and it will stay that way all of our lives," she explained.
This type of a transplantation is quite rare. Esti Katz, Rambam Hospital's transplant coordinator, notes with satisfaction, "It is quite rare that we are able to coordinate such an operation quickly, and within three weeks we successfully performed the operations."
Rabbi Yeshayahu Heber, chairman of the Matnat Chaim Association, welcomed the special transplantation. "This transplant is an exciting, uplifting union between different parts of the nation – Jews and Muslims, religious and secular, women and men. That is the beauty of Matnat Chaim (which means Gift of Life), and I hope we will continue to connect and unite the people through an altruistic lifesaving."
In the Photo: Kidney donor Ido with transplant recipient Hanan.
In the Photo: Kidney donor Aida with transplant recipient Israel.
Photography: Nathaniel Ayzik, Rambam Spokesperson’s Office. 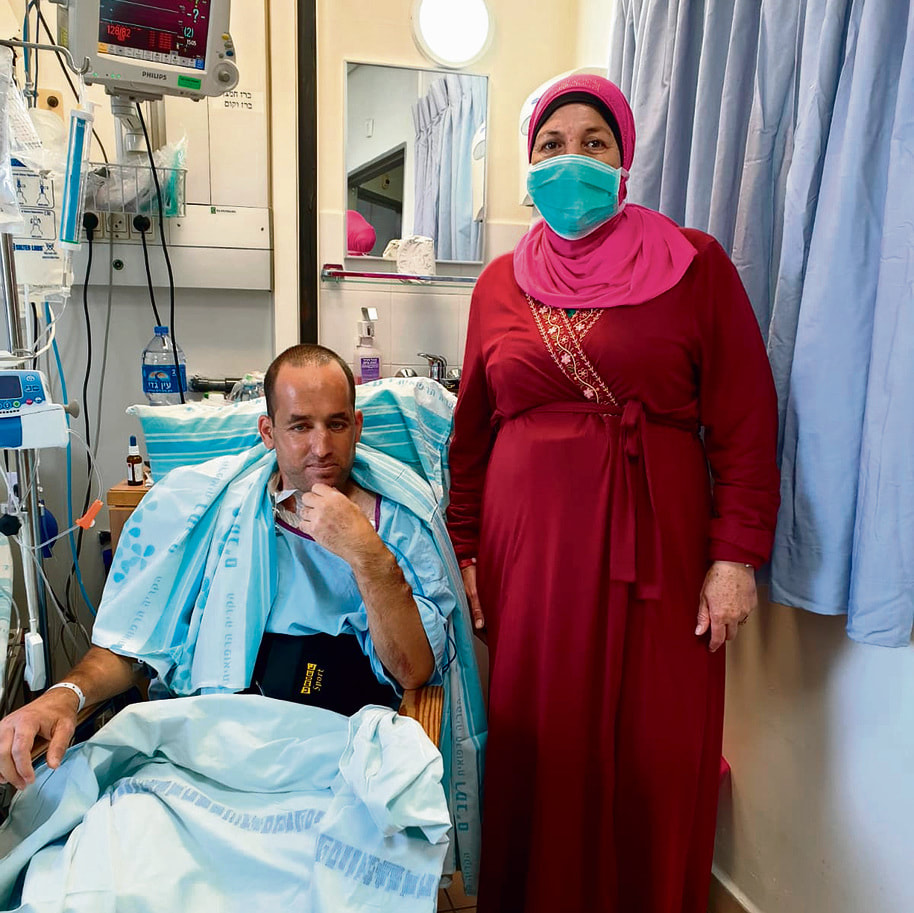