May 21, 2020 – Rambam Celebrates World Day for Cultural Diversity for Dialogue and Development: “We are proud to employ more women, Arabs, and members of the Ethiopian community than last year.”
In honor of the United Nations World Day for Cultural Diversity for Dialogue and Development on Thursday, May 21, 2020, Rambam Health Care Campus is publishing data about the various population groups employed at the hospital.
Ethiopians constituted 3.1% of all hospital workers in 2019 vs. 2.6% during 2018.
Members of the Arab sector, which also includes Druze and Circassians, constituted 25.6% of Rambam’s workforce in 2019 vs.  23.5% in 2018.
Disabled workers constituted 3.5-5% of Rambam’s workforce in 2019 and remains basically unchanged from 2018.
Although workers from the Haredi sector constitute only 0.4% of Rambam’s employees as of 2019, the goal is to significantly increase this number by the end of the year.
Women make up 57% of senior staff members at the hospital, a 2019 statistic which  marks an increase over previous years. Just last week, three women were promoted to senior management positions at Rambam: Dr. Yael Shachor-Meyouhas was appointed a Deputy Director of  Rambam, Dr. Daniella Magen was appointed Director of Ruth Rappaport Children’s Hospital, and Dr. Shifra Ash was appointed Director of Pediatric Hematology-Oncology.
"Rambam is an exemplary model of coexistence, reflecting the diversity of Israeli society," says Dr. Michael Halberthal, Rambam’s General Director. "We are very proud of our human capital, an integral part of the fascinating mosaic that is Rambam. Our hospital acts as a bridge between many different ethnic groups with different languages and religious beliefs. We are all united on the basis of our shared humanity—this is the beauty of Rambam."
Rambam’s management joined the Civil Service Commissioner’s internet campaign, which was inaugurated today, in honor of World Day for Cultural Diversity for Dialogue and Development.  Rambam representatives were photographed with signs bearing the hashtag: #diversifying_public_service, and inviting others to join the challenge. The aim of the campaign is to raise awareness of the subject of employment diversity in Israel.
"Diversity in employment is the concept that human capital—which reflects the composition of the population—is a significant benefit to the business world,” explains attorney Nardeen Sbait, who is responsible for employment diversity at the hospital. “The goal is to create opportunities to recruit top-notch people from a variety of populations in the country, and consequently to produce a rich work environment with great potential for innovation and creativity. A multicultural work environment reflects the population we serve, and in such a sensitive environment as a hospital – it is a necessity that cannot be compromised.”
In the photo: Nardeen Sbait and Dr. Michael Halberthal mark World Day for Cultural Diversity for Dialogue and Development
In the photo: Members of Rambam’s diverse research team in the laboratory
Photography: Courtesy of Rambam Health Care Campus 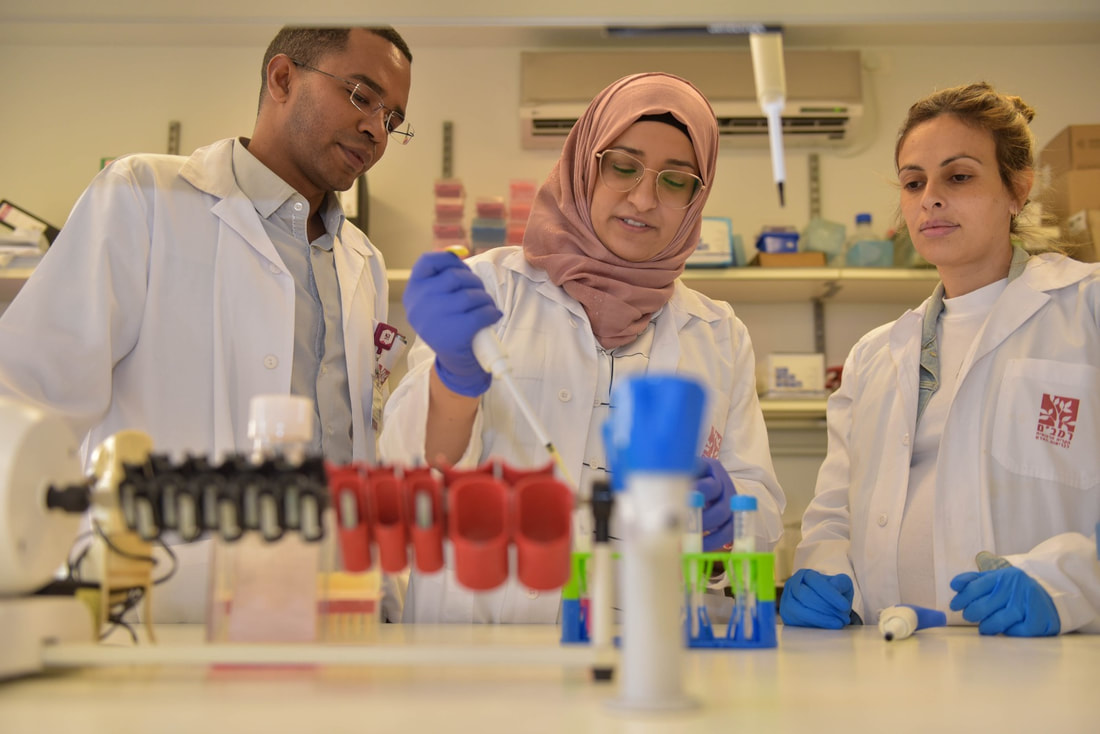