With the start of the Jewish New Year, this month also marks the start of a new construction boom at Rambam Health Care Campus. Starting it off is completion of a new Radiation Therapy Wing of the Joseph Fishman Oncology Center. Construction is also in full swing for the new Eyal Ofer Heart Hospital and will commence shortly on the Helmsley Health Discovery Tower.
​
Just one week before Israel celebrated a New Year, Rambam Health Care Campus celebrated the opening of its long awaited Radiation Therapy Wing. The formal ceremony, held on September 3, 2018, was attended by Israel’s Deputy Minister of Health, Rabbi Yaakov Litzman, Haifa’s mayor, Yona Yahav, other city representatives, and members of the hospital administration as well as hospital employees, donors who contributed to the wing, and the general public.
The 1,500 square-meter (16,146 square-foot) underground Radiation Therapy Wing includes four spacious bunkers for linear accelerators (commonly used for radiation therapy in cancer patients), patient reception areas, servicing areas, and a control center system.  Each linear accelerator is located in a bunker with 1-2 meter-thick (3-6 feet) concrete walls and ceilings to prevent the high-energy X-rays from escaping into the environment.  In the future, unique to Israel, one of the bunkers will be used as a special operating room that will integrate surgery with radiology in one surgical suite.
The accelerators are being installed within four bunkers (shielded treatment rooms)—two new ELEKTA linear accelerators supplied by MEDTECHNICA (already installed)—and the transfer of two existing linear accelerators from their current location in an older facility to the new wing (-3 level) of the Joseph Fishman Oncology Center.  Although the Radiation Therapy Wing is already in use, finishing touches will continue for a few more months. Once the entire project is completed, Rambam will be able to operate all four linear accelerators which should, in as little as one month’s time, significantly reduce wait times for radiation therapy at the hospital. Upon completion, Rambam’s Radiation Therapy Wing will be the most advanced of its kind in Israel.
The planning and logistics for the wing were complex and included construction of a complete subsurface support system and special infrastructure for operating the unit.  Concrete casting of such atypical thickness required special molds and supports.
The starting price for a linear accelerator is US$ 4 million. The two new linear accelerators in Rambam’s Radiation Therapy Wing were purchased, thanks to the philanthropy of Leno and Paul Sislin; Mrs. Ruth Rappaport of blessed memory, Dr. Maria Rossi Ascoli ( through the administrator general); Imad Abu Dayyah; Bita and Cameron Yadidi; Nataly and Sean Namvar; and Mersedeh, Ramin, Millad and Maya  Mesriani.
More Than Medical Impact
“In the first half of 2018, Rambam’s gross income grew by NIS52 million,” said Professor Beyar, “and there is a steady increase in the number of patients seeking Rambam's excellent staff, specialized consultations, and other services.  We are diligently working to shorten wait times for operations and to improve the infrastructure.”
Rabbi Litzman commented, “The Rambam Hospital I knew before and after Beyar are completely different.”
This is clearly good news for the economy of Northern Israel. Mayor Yahav pointed out that Rambam is the largest employer in Haifa.  He also spoke about the good relationship and close cooperation between Rambam and City Hall, with the mutual goal of casting Haifa into the lead role as a center for innovation.
A Robust Infrastructure for the Future
Rambam is also focused on completing its landmark West Campus strategic plan with construction of The Eyal Ofer Heart Hospital and Helmsley Health Discovery Tower, at a projected cost of NIS 400,000,000 (US$111,528,000).
Ground was broken for the 20-story Helmsley Health Discovery Tower this summer.  This unique initiative will enable close collaboration between Rambam clinician-researchers, University of Haifa researchers, Technion scientists, and medical device and pharmaceutical start-ups.  Such diverse perspectives will create a transformative facility where innovative clinical medicine, basic research, and applied research technologies will be integrated with medicine, engineering, and public health.  This new paradigm for collaboration is a new model for knowledge translation, exchange, and transfer. Hence, Helmsley Health Discovery Tower has the potential for becoming a world-class magnet for innovation, technology, and technology transfer that will transform healthcare at the local, national, and global levels—converting research expertise into novel therapies to address today’s most pressing healthcare challenges.
Thanks to the outstanding donation of Mr. Eyal Ofer, a staunch supporter and long-term friend of Rambam, the external construction and skeleton phase of Rambam’s Eyal Ofer Heart Hospital is under way. Completion of the Eyal Ofer Heart Hospital will meet a major need for the people of the region by providing upgraded and secure facilities in one centralized location.
“In the last decade, Rambam, Northern Israel’s largest hospital, has morphed into greatness,” avers Professor Beyar, “fulfilling its vision to maintain the centrality of the individual, whether patient or staff member, in every activity. Despite stumbling blocks along the way, in addition to upgrading and fortifying departments and clinics throughout the hospital, so as to be able to withstand conventional, chemical, and biological attacks, we have built Sammy Ofer Fortified Underground Emergency Hospital, the advanced and innovative Ruth Rappaport Children’s Hospital, and the Joseph Fishman Oncology Center. These new structures reflect the most advanced healthcare design principles, meeting the needs of Israel's residents in the north of the country and serving as models for specialized healthcare facilities throughout the world.” 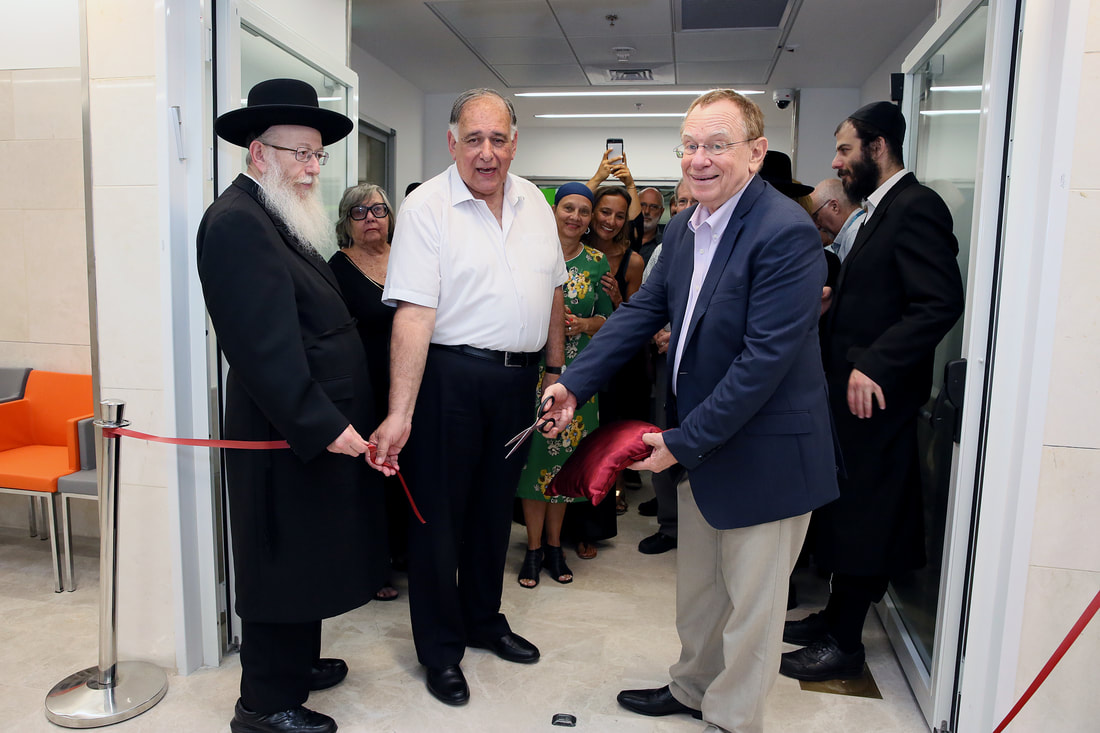