His Ankle replaces Knee Function After Rare Surgery at Rambam

​After amputation of his knee and mid leg, Jacob Abu Abbas underwent a rare operation at Rambam Health Care Campus, fusing his ankle to his upper leg, only backwards. His new "knee" should return him to full ambulatory independence with the aid of prosthesis.
Rotationplasty is an uncommon surgery where a portion of a limb is removed while the remaining limb is rotated and reattached. Tens of operations take place globally in only a handful of hospitals in the US, India, Germany Canada and now in Israel. Dr. David Nikomaraov, a senior orthopedic surgeon at Rambam Health Care Campus, performed the first rotationplasty surgery in Israel, attaching Jacob Abu Abbas's ankle backwards to his thigh.

After a serious work accident, doctors informed Jacob that they had no choice but to amputate his leg including his knee. However, his foot was in good shape and they could reattach it—only backwards, so that his ankle joint could function like a knee joint.  Jacob watched a video clip about an 11-year-old  American girl, Gabi Shul, who lost her knee and mid-leg to a rare type of cancer called osteosarcoma, and was later seen dancing with her peers. Dancing is her passion. The video presents Gabi's inspirational story and a simulation of the surgery from the Mayo Clinic in the US. https://www.youtube.com/watch?v=QQVAHbAV8QM
The operation is usually performed on children with bone cancers between the ages of five and twelve; the goal is for the repositioned ankle to be at the same height as the opposite knee when the child is grown.  Inspired by the video of the teenage ballerina, Jacob decided to go ahead and have the operation, the first of its kind to be performed in Israel.
After the groundbreaking operation in June, while recovering in bed, Jacob was interviewed. When asked what he looked like under the covers, the smiling Jacob replied, "You will see an upside-down foot. What you see will seem strange to you at first sight, and at second and third sight, the toes point forwards and the heel backwards…the surgery is crazy."
Dr. Nikomarov explains, "This is a complex procedure that is performed in only a very few hospitals around the world. This is the first time such an operation was performed in Israel by an Israeli team. The surgery lasted 14 hours and was attended a multidisciplinary team of ten doctors and six nurses." He added, "Jacob might have a limp, but I'm hopeful he'll be able to walk normally." 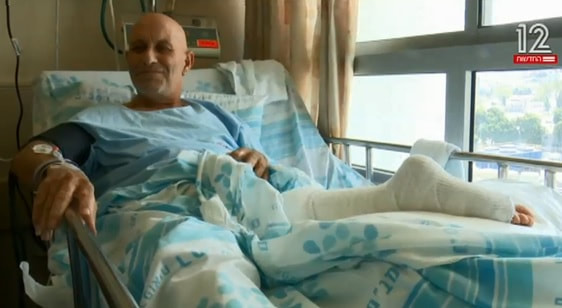