Around the World: Rambam Strengthen Ties with India, Brazil, and NATO

Within a few days of each other, Rambam hosted leading medical professionals from India, a diplomatic delegation from Brazil headed by its president’s son, and NATO military personnel in a training drill for emergency evacuation to a large hospital. Although the guests came from many different countries, learning about trauma care was the common denominator of each visit.
Professor Kant Ravi, Director and CEO of AIIMS Hospital in Rishikesh, India, arrived several days ago for an official visit to Rambam Health Care Campus, accompanied by his wife, Dr. Bina Ravi, and two other senior physicians from his hospital’s Trauma Unit. This was actually a reciprocal visit following a training workshop given by Rambam’s International Teaching Center for Trauma, Emergency, and Mass Casualty Situations (TCTEMCS) in the Indian hospital. The workshop had laid the foundation for the Indian hospital’s establishment of a trauma care system modeled on Rambam’s. During their visit, the guests from India met with Dr. Michael Halberthal, Director and CEO of Rambam and Chair of the  TCTEMCS; Mrs. Gila Hyams, Director of Nursing and Director of the TCTEMCS; and Dr. Hany Bahouth, Director of the Trauma Unit and Medical Director of the TCTEMCS. Additionally, the visitors met with Professor Yehuda Chowers, Director of Rambam’s Research Division and Clinical Research Institute, and with Professor Lior Gepstein, Director of Rambam’s Department of Cardiology, who acquainted them with the research initiatives and innovation projects at Rambam. Following their meetings, the guests from AIIMS were shown Rambam’s unique Sammy Ofer Fortified Underground Emergency Hospital, and taken to various treatment units and research laboratories. The guests were able to glimpse, firsthand, the operations of the largest hospital in Northern Israel.
Rambam’s Treatment Center for Trauma, Emergency, and Mass Casualty Situations stands out as one of Rambam’s most outstanding achievements—its training courses in Haifa for students from many different countries have influenced the way mass casualty trauma care is carried out all over the world. Among the course graduates are many individuals who have attained positions of key importance in their countries’ healthcare systems and who have established lifesaving trauma units based on what they learned from Rambam’s experience in treating the injured in wartime, during terrorist emergencies, and in many other catastrophes. Rambam and a number of hospitals in India’s AIIMS network of medical centers have been collaborating with each other for several years. Rambam aims to continue this close relationship with Indian medical institutions.
INTERNATIONAL MEDICINE: SOUTH AMERICA AND EUROPE
At the same time, we were happy to greet a delegation of high-ranking Brazilian officials from the government, the police, and the healthcare sector. Heading the delegation was Senator Flavio Bolsonaro, son of Brazil’s president, Jair Bolsonaro. The visit was initiated by the Haifa Economic Corporation. The delegation was very interested in learning about Rambam’s medical innovation, trauma care, and preparation for national disasters. Delegation members met with Rambam’s executive leadership and toured the entire campus.
Prior to the Brazilian visit, Rambam conducted a short training drill that included members of NATO, the Israeli Navy, and Rambam’s Trauma Unit. The exercise included a helicopter landing, a NATO evacuation operation, and the transfer of an injured person to the Shock Treatment Room. Rambam, as the prime center for trauma care in Northern Israel, is a major NATO partner in the area of preparation for injury scenarios and injuries to NATO soldiers. Joint Rambam-NATO drills like this are carried out from time to time.
Dr. Halberthal maintains that the prominence of Rambam in the field of trauma is a product of our experience in the region. “At the global level, we have made significant inroads in the field by going to many countries and training medical teams to treat trauma and to function in mass casualty situations,” Halberthal said, adding “but also, here in Haifa, we share our knowledge and use the experience we have gained to both train guests who come to learn from us and to care for patients referred to us, including those coming from other countries. When you realize how local experience can have such international significance, it's pretty amazing.”
In the pictures: Visit to Rambam of the medical team from India
Photography: Pioter Fliter 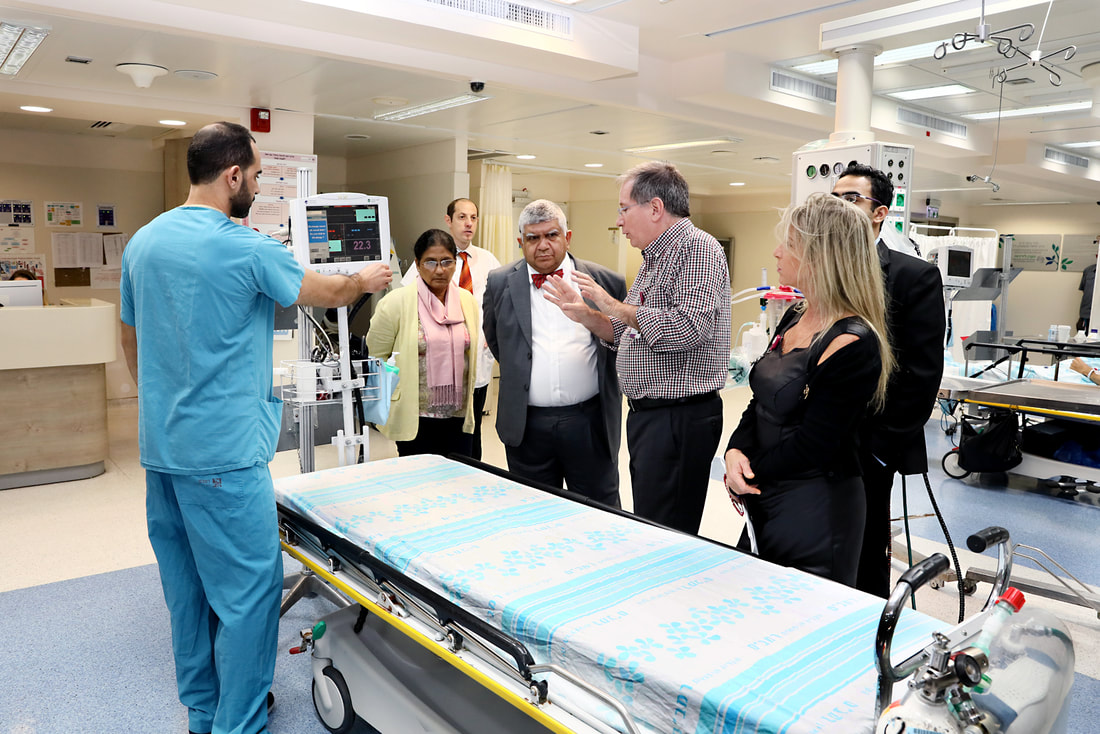