Early Saturday morning an Iranian drone flew into Israeli territory. When the Israel Defense Forces responded by attacking the drone launch site, the Syrian army retaliated, damaging one of the Israeli fighter jets. Before the plane crashed, the pilots were able to bail out. The pilots were flown by the Israeli Air Force to Rambam Health Care Campus for emergency care.

Upon arrival, the two pilots were rushed to Rambam’s Shock Trauma Room. One of the soldiers was only lightly wounded and bruised. However, the other pilot had a stomach injury. A CT exam revealed a penetrating wound that required immediate emergency surgery. Dr. Hani Bahouth, the head of Rambam’s trauma unit performed the operation. On a respirator, the pilot was hospitalized in stable condition in Rambam’s Intensive Care Unit (ICU).

This morning, Dr. Yaron Bar-Lavie, the director of Rambam's Division of Critical Care advised that the pilot had been removed the respirator. Although he remains for now in the ICU, his condition has improved. Early this afternoon, President Reuven Rivlin arrived at Rambam to visit with both pilots and their families. Professor Rafi Beyar, Rambam’s Director, and Deputy Director Miki Halberthal greeted President Rivlin.

Wartime experience has made Rambam Health Care Campus the exclusive comprehensive trauma treatment provider in Northern Israel and a world leader in mass trauma and casualty education. Treating more trauma victims than any other hospital in Israel, Rambam’s percentage of trauma survivors is the
highest in the nation. 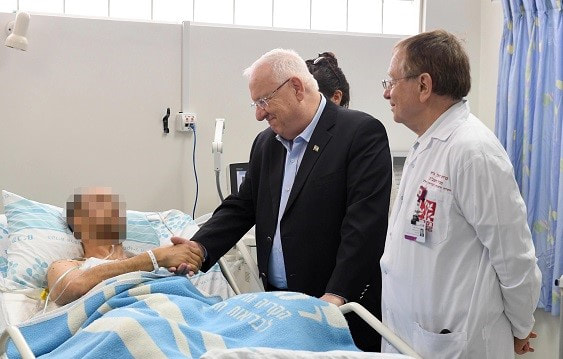