Art therapy in the Joan & Sanford Weil Division of Pediatric Hematology-Oncology can last for a month, six months, or even longer. The length of time depends on the level of cooperation, the child’s diagnosis, and how long they’re hospitalized.
Tucked away at the end of a seventh-floor corridor in Rambam’s Ruth Rappaport Children’s Hospital is a small, bright room filled with art supplies. The room, located in the Joan & Sanford Weil Division of Pediatric Hematology-Oncology, is used primarily for art therapy sessions for the hospital’s pediatric oncology patients, who can choose to sculpt, draw, paint, and more. Approximately 8–10 of these children either visit the room each week to work with art therapist Dafna Lavi Haker, a member of the department’s multidisciplinary psychosocial team.
Art therapy is a therapeutic technique for emotional expression, which relies on the primary tools of art and creativity. It can also include play (dramatic games, symbolic games, sometimes board games)—especially with younger patients—and conversations. This type of therapy enables patients to connect to their own strengths especially in times of crisis, like those they experience when undergoing cancer treatment. Art therapy helps them to adjust to their illness, their diagnosis, and to the whole hospital experience
Notes Lavi Haker, “Many times, it’s difficult for children – and adults – to express their feelings in words, and this is where the art comes in. It doesn’t come from a place of me trying to diagnose them, but rather giving them a way to express themselves through the colors, the creativity, and the art materials. They don’t always have to talk about the situation. The main emphasis is on the process, and less on the final product. Children can show their art afterwards or take it with them if they choose, but that’s not the goal like it would be in an art lesson or an after-school art program. It’s about the process and the good experience they have.” She also points out the significance of the relationship with her, as someone who accompanies the children throughout the duration of their treatment – a familiar face who is neither a doctor or a nurse, but rather someone who provides them with pleasant experiences and shows that she is always there for them.
Lavi Haker tells a story about a young girl with an inoperable, incurable brain tumor, who was treated with radiation therapy in order to ease her pain. Lavi Haker initiated sessions with her because it was really difficult for her to come to Rambam for treatment every day. “I was asked to intervene and try to help her. She came twice a week, and I reached out very quickly. She was a very creative girl with a lot of imagination. We connected and created work that was ongoing – she knew that something was always waiting for her in the art therapy room, something that she would continue to work on during her visits. She had a reason to come to the hospital in addition to the treatment. As a result, she would come with a lot more energy and stopped resisting coming to the hospital. She would come for radiation therapy, and knew that afterwards, she would come to me. She knew it was a place where she could be creative and use her imagination, her abilities and her ideas. It gave her feelings of independence and capability, and also helped her to lose her suspicions in a non-verbal manner.”
The psychosocial team has also developed a program to help prepare kids emotionally for radiation therapy. Younger children are often sedated during radiation, and the goal of this program is to try to reduce the need for sedation for as many children as possible. To that end, the team has started doing emotional preparations that involve creating artwork, conversations, drama, and play.
In addition to working one-on-one with patients, the psychosocial team has twice organized groups for siblings. These groups are run by art therapy and psychology students, using art to work with 9-12-year-olds whose brothers and sisters are battling cancer. The groups have been very successful, and Lavi Haker hopes to organize an additional sibling group this year. She is also hoping to launch a group for teenagers with Hodgkin’s lymphoma. “Treatment is short and teenagers are often against individual sessions, so we thought it would be helpful to start a group – even for those who have already finished treatment – that is based on art as well as other tools,” she explains.
“When I started working at Rambam, I didn’t know what to expect. It seemed like it would be challenging, and that it would be a very meaningful experience – both professionally and personally, and I was right,” says Lavi Haker. “When I see success – not only in terms of a child recovering and becoming healthy again, but also in terms of the child cooperating with regard to treatment and seeing how meaningful and important my involvement is to them, as well as the doctors seeing and understanding how important my role is, it’s very satisfying and makes me want to continue, despite how difficult it can be. My greatest wish, of course, is that there wouldn’t be any children here to treat,” she adds.
In the photo: 1) Children working on art therapy projects in the department's open-air patio; 2) Acrylic on canvas by a 19-year-old Druze woman while in art therapy.
Credit: Rambam HCC Archives. 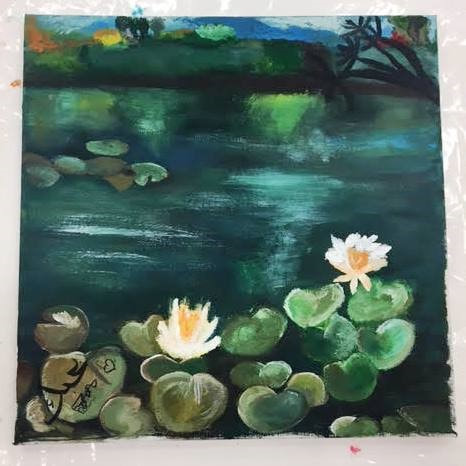